April at the Arch: Saturday

Saturday I was up early to go take care of Ruby - took her out for a handwalk to stretch her legs, cleaned her stall, brushed all the shavings off her (homegirl did a lot of sleeping apparently lol). Since my rides weren't until between noon and one, I had plenty of time to watch/cheer for many other riders from our barn! We had riders from training all the way up through a horse making an I-1 debut with TrainerB - including a musical freestyle! 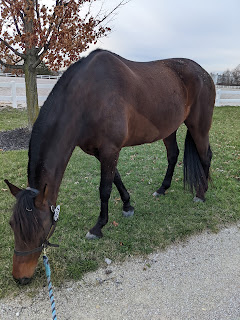 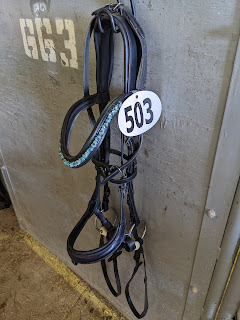 I took sooooooo many photos of everyone else, and was really hoping I'd get some good media of my own from the weekend, but alas... it's kind of lacking, sigh. DH skipped Saturday in favor of a work event and my mom didn't leave her house in enough time to catch my first ride, so I handed my camera off to a barnmate Saturday and got some photos. Between the arena footing (very very soggy) and the weather (incredibly windy), apparently they had quite a few scratches. When I made it down to warm up and checked in with the ring steward, I was the only horse down there and she told me I could go in whenever I wanted. I didn't want to keep the judge waiting forever, and Ruby seemed a wee bit frazzled to be the only horse in the area, so I figured we might as well get the first test over with. I actually felt decent about it at the end (First Level Test 1 Maiden Horse [or Maiden Rider, since the prizelist and day sheets said different things and the show manager and office blew me off when I asked about the discrepancy and I suppose it doesn't REALLY matter since both were true]), and asked TrainerB what she thought it might score and she seemed to think probably low-60s, so I'll admit I was a little disappointed to see it score 56%. That ride was the last one before the lunch break and then I was the first ride after the lunch break, so I took Ruby up the barn and let her get a drink while I chugged a bottle of water - the footing in the outdoor arena somehow made my mouth SO DRY and I was PERPETUALLY thirsty any time I rode out there.
By the time we made it back down for our second ride, it was even windier before, and Ruby's enthusiastically leaping (and occasionally cross-cantering) canter departs had returned, and after we cantered I never could get her to settle back into the trot so we left a ton of points on the table. I was (am?) supremely disappointed with myself over both tests, and also a little frustrated with the judge over the lack of overall comments, particularly First-Two, which netted me a 54% and change where the judge just wrote "enjoy".... enjoy what?
The absolute BEST part of my day was going out for dinner after to an amazing restaurant and GETTING THE SURPRISE OF MY LIFE WHEN T SHOWED UP OUT OF NOWHERE. This crazy good friend drove a ridiculous amount of hours to come hang out with me for like 18 hours and I am so grateful. She helped keep me (slightly more) sane on Sunday, which I desperately needed. 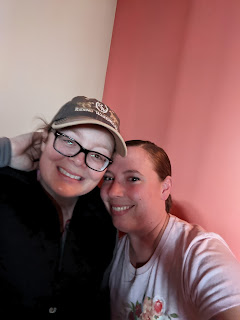 We were able to head back to the hotel at a reasonable hour and get some sleep, and thankfully nobody at my barn rode before 9 a.m. on Sunday so I felt like we didn't need to be there quite as early.