TrainerB was only available for a lesson Sunday of last weekend, which was a wee bit of a bummer because I had tentative plans to meet up with some friends for a trail ride that day, but I ended up opting for a lesson instead - there will be lots of weekends the barn is at shows I can't afford (lolz) so plenty more opportunities to trail ride, but I really felt like Ruby and I needed some redemption after the show. I needed the reminder that I AM capable of riding my horse, and even occasionally riding her well. And boy did this lesson deliver. 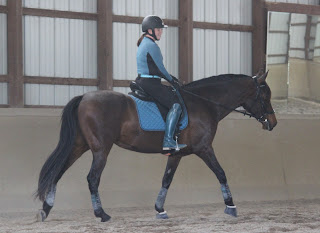 I warmed up while TrainerB was finishing a training ride on a freshly minted I-1 QH/friesian cross (who I adore, he's SO sweet), so once she got off we were able to jump right in. And the name of the game was SUPPLENESS and RELAXATION. You know, the things we DIDN'T have at the show, lol. We started out with 10m circles at every letter in both directions, with several changes of direction via 10m half circle serpentines across the short side of the arena. Do you know how many dressage letters there are? SO MANY LETTERS. It was a good reminder to me to BREATHE and relax my shoulders - quite often if she was tense and braced, there was corresponding tension in my shoulders. And frequently if I took and released a big breath, she would as well. WEIRD. 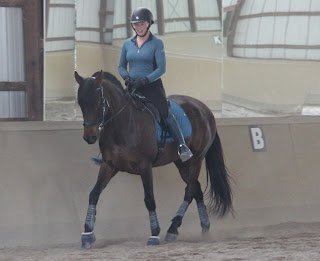 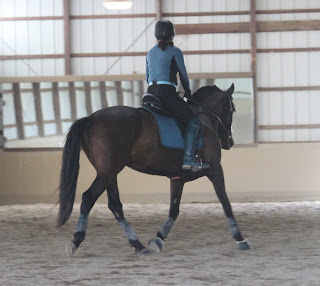 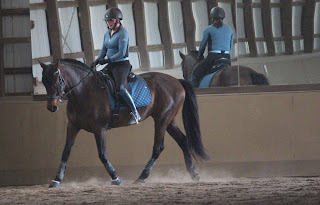 After the trotwork was really consistently soft and supple, we worked on carrying that over into the canter. There was zero leaping into the canter (well, minus one transition she made, fell back out of, and I bumped her a little harder than necessary to pick it back up again, which you'll see in the video down below lol) and the canter was infinitely more rateable.... soooooomeday we'll have that canter at a show, sigh. But in the meantime, it was good to work on how slow and soft I could make it, and how much of the energy I could continue recycling through her entire body, instead of propping like a porpoise. The canter bears basically zero resemblance to the one I had in mid-March before the chiropractor's appointment and the show. 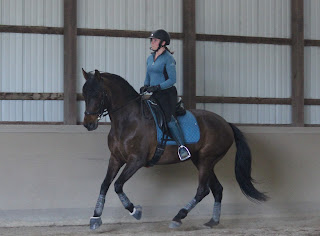 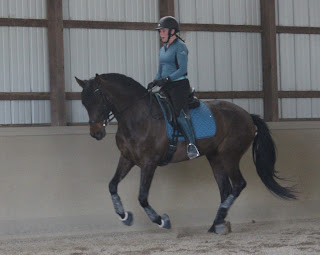 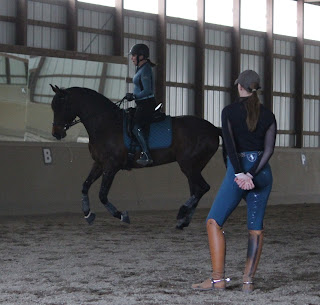 I scrolled back in my youtube history and found some of the first videos from our lessons in early September (didn't have any video from the August lessons unfortunately) and it doesn't even look like the same horse. If I had more patience for splicing video on IG I'd make some before and after reels of it, but I am fundamentally very, very lazy lol. 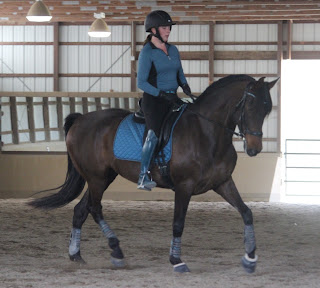 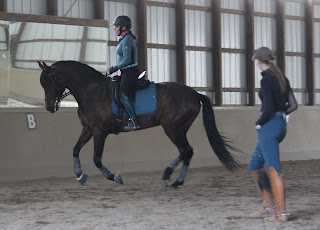 Show season will really be ramping up for TrainerB and some of the barn ladies, so I'll probably drop back down on a 2x a month schedule simply because they'll be gone a lot. We've got an appointment with the saddle fitter late next week, so I'm interested to see what she says about my current saddle, if the Custom can by some miracle be adjusted to work for us, or if there is another direction entirely she thinks we should go in. I also broke down and ordered a bit TrainerB and I had been discussing - a Neue Schule Turtle Top. I can't remember if I posted about it here, because it was in one of those hazy pre-show lessons, but sometimes the nathe is too soft and Ruby blows through it, but the Verbindend is "too much" and she gets offended, so TrainerB suggested it might be an interesting compromise. Long story involving me not so patiently waiting for SmartPak to restock it because they were $100 cheaper than anyone else in the States only to live chat their customer service to check on the new stock date causing them to promptly raise the price (fuck off SmartPak, for real), so then I scoured the internet for UK sites with coupon codes (Lauren is the real MVP there) and I was finally able to score it for about $5 more than the original list price at SP. So. Even if Ruby (and Cinna, I want to try it on Cinna) both hate it, I can easily sell and break even - possibly even to TrainerB, who likes the bit but doesn't currently own one lol. I was supposed to pick one up from a local-ish-to-TrainerB college friend of mine at the show, but I completely got distracted and forgot, so I just broke down and bought my own lol. Anyway - possibly mixing up some tack in the near future to see if we can continue to fine-tune whatever makes Ruby the most comfortable!
Posted by TrainwreckInTeal at 5:00 AM